About
Head of School 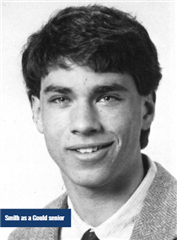 Finding the Way to Gould, Part One : His Younger Years

As Smith tells the story, he was born “at the tail end of the hippie movement” on a houseboat in Sausalito, California.
His father worked as a fisherman, a blue-collar, New England-conservative, “realist” from Vermont. His mother was a free-thinking, first-generation American, New York “idealist” with opinions that put her decades ahead of her time. Their neighbor was author Shel Silverstein. Their social circle included musicians Neil Young and Stephen Stills.

When he was 3, the family moved back to Vermont, joining the larger, back-to-the land movement taking place in the mid-’70s.
“So many of the things I love in life come from growing up in rural Vermont,” Smith says. “There was an aspect to the place that was open and welcoming, in the Robert Frost tradition. But, at the same time, it was not very sophisticated.”

“I felt like I belonged in a way I hadn’t felt anywhere before then. We were driving away— not even out of sight of the field house roof—and I turned to my mom and said, ‘That’s my place.’”

The differences between his family and their neighbors increasingly set Smith apart from his public-school classmates. “Conversations around our dinner table were interesting, to put it mildly,” Smith explains. “There was a lot of philosophical and political discourse. I got to see, firsthand, differences in opinion, and viewpoint of the world.”

While the seeds of intellectual curiosity had been planted before he got to Gould, Smith credits his teachers, like English teacher Mac Davis, with igniting his interest in learning.

“At Gould, the program matched my passions and interests, whether academic, out-of-doors, or athletic,” he says. “I was accepted for who I was by the adults and the other kids for the first time in my life.”
Back