Looking to the Ocean for Sustainability

LOOKING TO THE OCEAN FOR SUSTAINABILITY

WE’RE TRYING TO TACKLE THE PROBLEM AT A GLOBAL SCALE, BUT, WHEN YOU BOIL IT DOWN IT’S ABOUT HAVING AN INTIMATE RELATIONSHIP WITH THE OUTDOORS AND THE NATURAL SYSTEMS.
MARTY ODLIN ’00 comes from a Maine fishing family. He remembers a time when hundreds of thousands of pounds of cod were hauled into the Portland docks every day. FINNIAN DONOVAN ’05 grew up on the Gould campus, relishing the outdoor life of the western Maine mountains. They both remember a different natural world, and particularly a different ocean. As the impacts of climate change and the acidification of the water have intensified, the Gulf of Maine has deteriorated in many areas to a near desert in just the years since they graduated. In those years the sea grass and many other species have virtually disappeared from the shoreline, overfishing in the North Atlantic has severely depleted what was once a plentiful food source, and the balance of the natural systems has tipped.

I LOOK AT OPPORTUNITIES SHRINKING AROUND ME. AND I LOOK AT CALIFORNIA ON FIRE. WE ESSENTIALLY HAVE GODZILLA STOMPING ALL OVER THE WORLD AND JUST DESTROYING EVERYTHING, AND COMING FOR EVERYTHING THAT WE LOVE. AT SOME POINT, YOU’VE GOT TO FIGHT IT.
With generations of fishing in his family, Odlin had dreams of running his own mackerel boat—he planned to name it Running Tide. He brought his engineering degree from Dartmouth and his workin climate change at the Earth Institute at Columbia back to Portland and set out to help modernize operations for the groundfishing fleet his family operated in the Gulf of Maine. The improvements allowed his parents to sell out and retire but, after calculating the cost of buying quotas for species that were swimming north as climate change warms the waters, he realized that the numbers for his own boat just didn’t work. Odlin changed his dream from the fishing life he had planned, to working out ways to address the problems that were damaging the resource.

Donovan explored the sciences and the arts in his college programs at UVM and UNH, starting in pre-med and finishing with a fine arts degree specializing in woodworking before joining the US Marine Corps. Retiring from the Marines as a Captain in MARSOC, Donovan, a creative, artistic, scientist, outdoorsman, special forces leader who had experience in logistics and project oversight, as well as maritime operations and diving—was exactly what the developing company needed. “Finnian is a true creative genius. He is a remarkable outdoorsman with a real feel for the interactions of nature, and
he applies a disciplined mindset to everything he does,” says Od-
lin. “He’s humble, hilarious, and smart; Running Tide wouldn’t
be what it is without him. The operation relies on him, and we
learn from him every day.” At Gould, Odlin and Donovan had both encountered the “think with your hands” creative power of the arts, the “work with the team” energy of outdoor projects and athletic competition, and the “learn from experience” foundations in the social sciences, hard science, and literature. Through the intimate connection to the outdoors that life at Gould provided, they also absorbed a fundamental community belief; nature is the foundation of everything else we do.

The first step in the Running Tide journey focused on a seafood solution. Rather than running the traditional boats to fish for rapidly declining groundfish, the company turned to aquaculture—an operation to grow, rather than fish for, rich seafood protein for a hungry market—and the crop would be oysters. The company is a diverse team of fishing captains, engineers, biologists, tech and software, agronomists, and fabricators. With Donovan on board, they created a combination of robotics, sensors, and machine learning to control the shellfish aquaculture operation, seeding oyster reefs where an annual crop of native Avalon oysters is farmed and harvested. The low impact shellfish farming is one way to reduce carbon emission from food production.
But an ecosystem in crisis can’t be restored or sustained by fixing just one element and reducing fossil fuel consumption in the fishing fleet doesn’t undo years of emissions. Running Tide turned their creativity and logistical attention to finding ways to have more impact on their industry. Says Donovan, “We’re trying to tackle the problem at a global scale, but, when you boil it down, it’s about having an intimate relationship with the outdoors and the natural systems.”

One environmental “heavy lift” comes from the filter feeders in the shellfish operation. The oyster farm contributes to improved water quality and nutrient balance in a healthy ecosystem, which in turn creates a prime growing environment for kelp. What’s more, the Running Tide team recognized that erosion and habitat deterioration have impacted the coastal ecosystems and that macroalgae, or kelp, has potential for immediate impact. The initial focus on growing healthy, sustainable protein with aquaculture expanded to focus on the contribution of microalgae to reducing wave action and improving water quality near shore. Running Tide began work on demonstrating the viability of cultivating kelp as a key to restoration efforts on the damaged shorelines. The work of navigating the permitting and developing a monetization strategy for scaling up a coastal restoration plan is still ahead for a recovery strategy that may take decades to deliver results. Meanwhile, the research led the team to considering how elements of the work could be applied to global scale issues of climate change.

Most kelp operations, including Running Tide’s coastal restoration concept, are located near shore, in shallow coastal waters. In coastal systems, filter feeder shellfish living in the shallows provide the nutrient profiles that support kelp growth, and the shallows also provide rock outcroppings for holdfasts—the kelp “root” system. Seaweed, like all plants, pulls carbon dioxide from the environment but, unlike land-based forests, it isn’t vulnerable to burning, and it isn’t harvested for building materials or removed for land development. Kelp plants fix the CO2 in their biomass and ultimately transport it to the bottom. However, in its natural location, kelp sequesters carbon in shallow coastal waters where the storage time is short. It dies, decomposes, and releases carbon back into the system in what’s known as the fast carbon cycle. It doesn’t provide a permanent solution; it just moves the carbon back and forth in the environment. 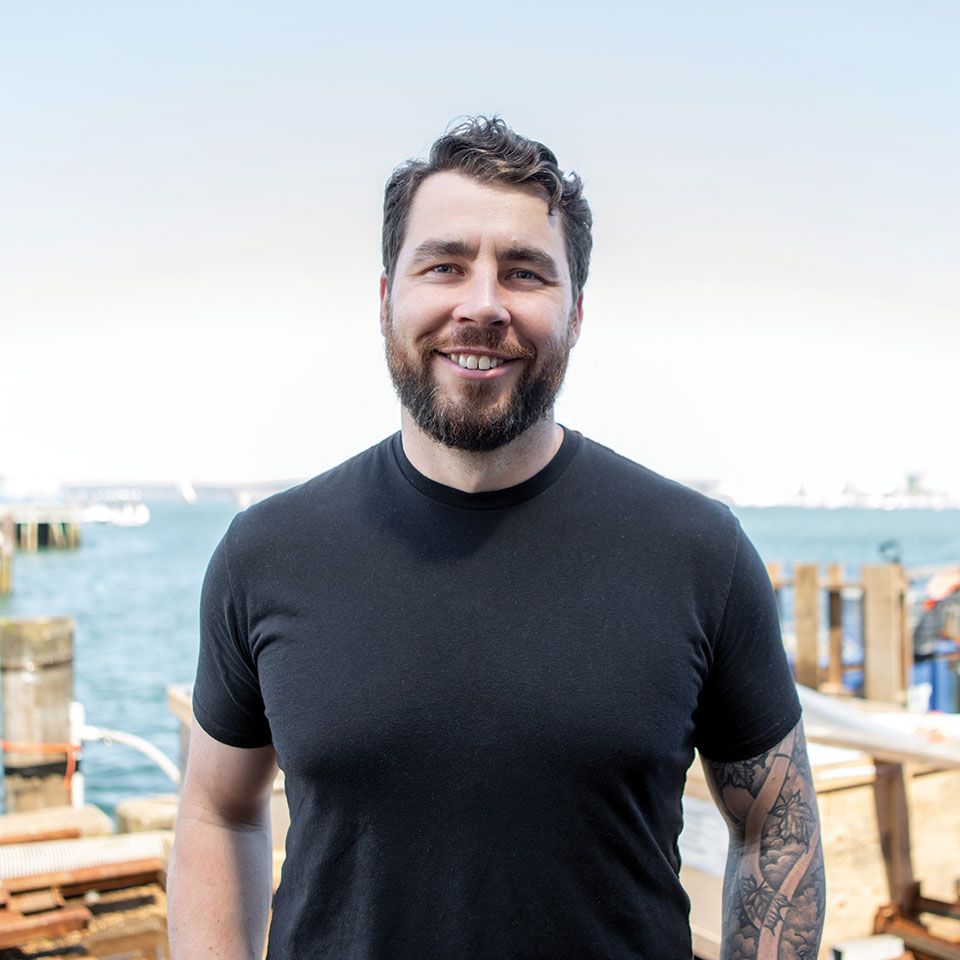 Coastal shellfish production and ecosystem restoration work are hugely important, but preventing the worst effects of climate change will require moving from the fast carbon cycle to long-term carbon sequestration. The challenge is to achieve permanence in carbon storage, which has led Running Tide to develop a long-term ocean health solution with durable carbon storage.

Commercial seaweed-growing operations harvest their kelp forests as a food product and the need for harvesting access puts limits on water depth and distance from shore. The Running Tide concept for long term storage of CO2 relies on sinking, not harvesting, their kelp production. The team has developed a strategy to grow the kelp near the surface in the open ocean where it can photosynthesize and fix CO2, before it sinks to the deep ocean. Running Tide believes that this process could offer a way to solve some of the more troubling elements of climate change.

The elements of the Running Tide concept are being developed near shore, and recent interest from venture capital will enable the team to begin testing the offshore hypothesis. The concept starts with seeding kelp on biodegradable buoys made from forest residues, which would otherwise be burned or discarded (and would release carbon back to the fast cycle). The buoys are deployed into ocean currents, where they disperse geographically. The macroalgae grows, suspended in the nutrient-rich upper photic zone of the sea. Over time, the buoys lose their buoyancy and the weight of the healthy kelp forest sinks the algae—with its stored carbon—to the ocean bottom. The system uses ocean currents, sunlight, and gravity to deliver its climate solution to the deep ocean, where the material and its stored carbon are removed from the “fast carbon” cycle for hundreds—up to millions—of years.

Initially, we were all focused exclusively on shellfish on the operations side of the house, and the carbon removal was mostly theoretical. And then we took up the carbon removal effort. The carbon removal work is completely necessary for the sake of the planet. Whereas with the coastal restoration you can see the benefits of that within a single digit number of years, realistically, we're not going to reverse the effects of climate change on a timeline that any of us can see, but follow-on generations will see the benefits if we do a good enough job.
“Once it goes down below 1,000 meters, it’s not coming back up, because the pressures are so great,” says Odlin. “So, you can get at least 1,000 years of sequestration. More likely, it will turn into oil or sediment and be sequestered on geologic timescales—millions of years. At large scale, the process could offer a significant breakthrough. Renewable energy solutions reduce excess emissions, but negative emissions projects like the Running Tide concept will be needed to capture the excess carbon that already exists and to offset the areas where decarbonization may be slower by growing and sinking the kelp crop far offshore, using larger areas of ocean bottom, and then selling carbon offsets. Microalgae kelp is fast growing and could reach the “sinking” stage in as little as a year. With oceans covering 2/3 of the Earth’s surface, there is huge potential for developing kelp microforests far from shore in selected favorable zones where impacts on sea life will be minimized. By using a natural system, and optimizing it, the concept delivers low capital costs and offers high potential for growing the process to large scale. Some studies suggest that this technology already has the potential to offset agricultural emission levels. The early work with aquaculture food production for an existing market got the company up and running. The expansion to encompass shoreline restoration strategies may have immediate impact potential in the local environment and beyond to coastal communities that rely on healthy shoreline ecosystems. Ultimately, considering carbon removal by amplifying the ocean’s natural processes has led to a viable solution to avert the worst effects of climate change.