1 / 1
Ronan Donovan ’01 is following three adult male chimpanzees through the forest in Kibale Forest National Park in Western Uganda as they make their way to a bordering tea farm. The chimps don’t go crop-raiding often, maybe once a month, so Ronan, who has been documenting the highly social primates for the better part of a year, decides to go along. They arrive at the hard edge between the woods and the croplands when suddenly the chimps get still. They understand they are entering inhospitable territory. The chimps wander into dense brush to conceal themselves from the villagers working in the field. Ronan, close by, follows them quietly into the thicket.

“It was this bizarre moment of hiding from my own kind with this group of chimps as one of them,” he explains. “It was a very powerful moment to understand the intellect and discerning abilities of these wild animals. ‘You’re ok, but we’re unsure of these other people.’”

Ronan was spending long hours camped out in the canopy at the time, photographing a group of chimpanzees in fig trees to support the research of Harvard professor Richard Wrangham. Ronan’s connection to Wrangham was through Caroline (Riss) Warne ’99 with whom he had spent 2011 in Uganda. It was there that he came to the understanding that there was a much more interesting and complex world that existed beyond the human community, and that photography could be more than just a hobby or research tool. “Having that time to study them over a year was this riveting and exhilarating experience. It will forever be one of the best experiences of my life.”
It was a very powerful moment to understand the intellect and discerning abilities of these wild animals. ‘You’re ok, but we’re unsure of these other people.’

It could have been a lot different. After graduating from Gould in 2001, Ronan studied international business and economics at the University of New Hampshire. He interviewed with a big firm in Boston and was offered a job in finance. But it didn’t feel right, and he turned the position down. Instead, he followed his passion for wildlife and the outdoors and soon found himself working in Yosemite National Park catching, banding, and monitoring spotted owls. He bought a camera just before he left for California in 2006.

“I had a curiosity about photography, though it wasn’t a driving force in any way. But when I went to Yosemite, it was this place of Ansel Adams, and the landscapes just got me incredibly excited. The valley, the mountains, and the big cliffs...it’s incredible. And, I had this view into an animal’s life that I never knew was possible. I became obsessed with photographing wildlife.”

He shot on film that first year, and kept a journal of every frame, meticulously cataloging his camera settings. “Wildlife biology and being in Yosemite. That was the start. I was hooked, that was my spark. That is what I wanted to be doing.”

LOOKING THROUGH A DIFFERENT LENS

Spotted owls led to a job monitoring marine mammals and sea turtles from ships that were mapping the seafloor for oil and gas. It was most likely a public relations move for the corporation, still, it afforded him long breaks between trips, and it brought him to Africa for the first time.


He took photos everywhere he went. Photography was what he wanted to do, but he still didn’t see it as a viable career. “The goal wasn’t to be a photographer. I didn’t know what that meant. I didn’t know what it was to work for National Geographic. I thought photography was selling prints and doing workshops. I didn’t know anything about storytelling or the journalism element of it. I had no idea.” He spent all of the money he had at the time on an expensive 800mm telephoto lens and was preoccupied with capturing the closest, most detailed portraits of animals.

It wasn’t until 2011 when he was in Uganda’s Kibale Forest National Park with Caroline that his thinking about the photographic medium began to shift. Those close-up images were impressive, but they didn’t tell a story.
1 / 1
“It’s not a very interesting image from a storytelling standpoint. To me, the more interesting images are when you can be close to an animal and have a wide field of view. You can see the landscape, you can see other animals, or you can see some sort of interaction. To just take an image of a single animal if they are living in a community isn’t fair to the animal. It doesn’t represent their true nature.”

Professor Wrangham agreed. The captures of the animals in a larger context weren’t just research photos, there was more to the work that Ronan was creating. Wrangham sent Ronan’s images to Tim Laman, a photographer with National Geographic. Laman, in turn, connected Ronan with Kathy Moran, a senior natural history editor with the publication. That’s as far as it went for a few years. Until 2014, when Ronan met with Moran in Washington DC.
Wildlife biology and being in Yosemite. That was the start. I was hooked, that was my spark. That is what I wanted to be doing.
1 / 1

Moran wanted Ronan to assist career photojournalist Michael ‘Nick’ Nichols who was being called back from planned retirement for a major National Geographic project focused entirely on Yellowstone National Park in celebration of the 100 year anniversary of the National Park Service. Ronan had never met Nichols, so Moran arranged a two-week “first date.” It worked. Two weeks became two years.

Ronan assisted Nichols on the National Geographic project for several months and then when the story of Yellowstone’s gray wolves needed images, Nichols pushed for Ronan to get the assignment. For the next year and a half, Ronan worked with Nichols and the team on the Yellowstone Wolf Project. The May 2016 issue of National Geographic was completely dedicated to the project, “Yellowstone: America’s Wild Idea.”

Ronan’s work in the final Yellowstone piece included a haunting photo of grey wolves in the snow feeding on a bison carcass.

The image was selected as one of National Geographic’s 52 best images of that year—curated from 91 photographers, 107 stories, and 2,290,225 photographs.

These days the workflow is a little different. National Geographic no longer has staff photographers, but Ronan has been selected as one of an elite group of National Geographic Storytelling Fellows. The nine fellows, from several disciplines, are selected for their dedication and commitment to shining a light on our shared human experience as well as demonstrating the power of science and exploration to change the world.
The storytelling fellowship provides Ronan with the funding and freedom he needs to produce his own project without any deadlines. He can tell the stories he is inspired to tell. It’s particularly compelling to use his unique technical skills in wildlife photography to share the stories of animals that have had limited exposure to humans; the ones that are more difficult to capture on camera. His latest fellowship project, “Human-Predator Coexistence,” will focus on the complex relationship between humans, wolves, bears, and cats around the world in an effort to better understand where and why coexistence occurs.


To get the most powerful footage he can while having the least impact, Ronan immerses himself in the world of his subjects, living for months at a time in jungles and rugged mountains or tundra. One technique he employs is using remote, unmanned, motion-triggered “trap” cameras that leave the landscape free of humans and capture animal behavior while minimizing the photographer’s influence on the scene. Ronan modestly says that he “spends much of his time failing,” but his successes are extraordinary. Trap cameras are a necessity when shooting human-wary animals in places like Yellowstone. He had a very different experience while on Ellesmere Island, Canada, only 700 miles from the North Pole, to document arctic wolves.

“Going to the Arctic and focusing on wolves that haven’t been betrayed by humans...they’ve never been hunted or trapped. They’re not scared, but rather they’re curious. That gives you the ability to tell a story about them in a more authentic and ethical way.” he says. “There’s this whole other world that we’re not educated about because we don’t have access. We can have a much deeper understanding of them and their behaviors.” He also began to use video in addition to his still photography. The extraordinary experience in the Arctic expanded into the three-part National Geographic docu-series Kingdom of the White Wolf.
1 / 1

In photography, it’s common to use a shallow depth of field that blurs the background making the subject the clear focus of the image. When the depth of field is adjusted to put both the subject and the setting into focus, we are almost literally awakened to a larger idea and environment. Ronan discovered that he could use his medium to tell these bigger stories, but the motivation behind this challenging work is much greater than just the joy of great storytelling.

The expansion of his scope amplified his understanding of the threats facing his subjects and their habitat. It’s the same logic that led him to expand his medium first from tight close-ups to wide-angle complex subjects and then from still photography to include video. By creating empathy for these creatures and these wild places through pictures and narrative, he hopes to promote the conservation of our shared planet that is increasingly at risk. The work expresses his hope that we will find solutions for coexistence with these animals, and find a balance living alongside these wild ecosystems.
“To me, the ultimate goal is to be able to create a story that you could then hand to organizations or government officials to spur changes to policies. It’s a tall order and a lot to ask for, but that’s the standard I hold myself to. Those are the images and the stories that I’m driven to create.”
They’ve never been hunted or trapped. That gives you the ability to tell a story about them in a more authentic and ethical way. We can have a much deeper understanding of them and their behaviors. 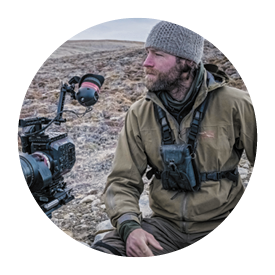